There are a few map generators made for the game.

This is the new online map generator for the game! It generates maps compatible with both The Settlers II as well as Return to the Roots, adding in features that have not previously been available!

Go ahead and generate maps right away!

Maqs made a map generator based on simplex noise pattern. Note that the maps generated are geared towars Return to the Roots and are prone to crash in the original game.

This map generator is now considered fully obsolete: it was made in 2005 - 2006 when most of the map files were still unknown. This information is left here for historical reference.

This generator does not provide perfect maps. Instead it makes the use of Blue Byte’s own map editor a whole lot easier by providing a random landmass. The landmasses generated by the map generator are of very high quality and after a few click you will certainly find a map that pleases your tastes and needs. Then save and launch the game’s map editor to decorate the map!

Also, once you have finished your map you can open the map again in the map generator. This time around you can apply a coastal castle fix, converting all castle tiles on coast as coastal castle tiles. Once saved again the map can then be used as a mission replacement map that lets you build ships - in your map!

There will be no further versions released. This program was written in Visual Basic 6 and since then I’ve lost the source code as well as my interest in writing any further code in such an old & unsupported programming tool.

As you can see, some shapes generated by the map generator are very interesting. 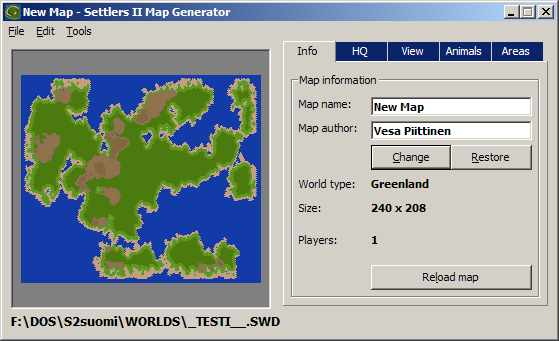 The map terrain is slightly randomized so you don’t need to look at boring flat ground, giving your maps a professional look and feel!

There is a lot of variety! And don’t worry, the map size is random as well, these sample images have big maps only to give a good idea on how much less work you have to do.